Few people have the ability to light up a room.

Mary Alexander is among those fortunate few, yet she’d never admit it. It’s not necessarily her beauty or her confidence that make her shine, though she has plenty of both to go around, but rather a general happiness and aura of positivity that supersedes time, age and experience.

Mary radiates – which is probably the reason she was chosen as ’s first female African-American model back in 1955. 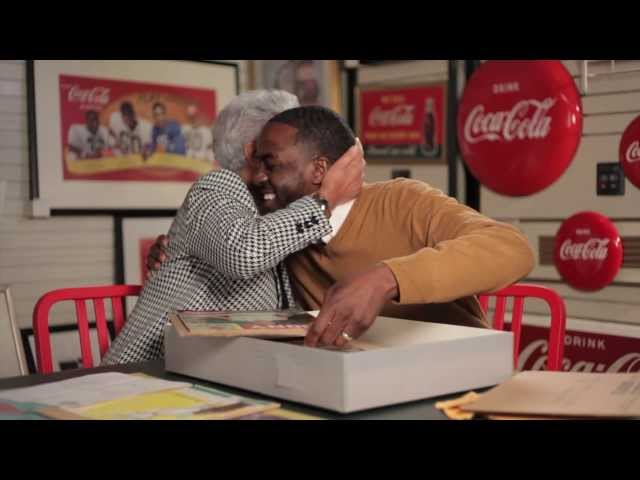 Ask Mary who she is, and she’ll proudly share her many titles: wife, mother, grandmother, former teacher and high school principal.

“We were married three years before I realized I was married to a model,” says her husband of three decades, Henry Alexander.

Affectionately called “Miss Mary” by some, she’s as humble as they come. So humble, in fact, that didn’t know the identity of the young woman pictured in those groundbreaking ads until more than a half-century after they were produced.

Mary in a 1955 Coke ad published in Ebony magazine.

Mary grew up on a farm in Ballplay, a small community in the northeast corner of Alabama. One of 10 children, she spent most of her days hoeing fields in the Southern heat.

“I had my first Coke at around 7 or 8 years old,” Mary remembers. “After a long, hard day of working on the farm, that was our treat at the end. We’d get an ice-cold .”

She became only the second person in her family to attend college, enrolling at Clark College in Atlanta. During her junior year, the housemother of her dorm approached her and explained that was trying to recruit African-Americans for a new advertising campaign. She suggested Mary try out.

Having no modeling experience, Mary hesitated, but agreed after the Dean insisted once more. She interviewed and was selected.

“I was surprised that they chose me,” she says. “Girls there were from Atlanta and New York. I was just a simple country girl!”

As word spread around campus, Mary’s excitement quickly turned into uneasiness. She describes her first photo shoot as “nerve-wracking.”

“I went back to my room and cried a little bit,” she recalls. “I was afraid this wasn’t what I should be doing. My parents were very strict, and I wanted to make sure they were okay with it.”

When the final ads came out, however, the mood changed.

“We told the whole family and spread it around campus,” Mary says. “It was surreal… I was just so happy.” She earned $600 total for approximately 15 ads, enough to pay for a full year of her college tuition.

A ad from 1957. Mary used the money she earned as a model to pay for a full year of her college tuition.

A Life of Firsts

While Mary’s face graced newspapers, magazines, billboards and New York subway stations, she fell out of touch with The Company. The ads marked both the beginning and end of her modeling career, though she would go on to achieve plenty of other firsts.

After college, she moved to Detroit to pursue a master’s degree for a career in education. The job market was tough for an African-American woman in the midst of the Civil Rights Movement, but after nearly three years of applying to positions and working as a real estate secretary, Mary landed a position at Mount Clemons High School.

The principal warned her that the school’s population was mostly white, and that she’d be their first African-American teacher. Yet Mary remained unfazed.

“I asked, ‘Well, do they all have red blood running through their veins?’ He replied, ‘They do,’ and I said, ‘Then I don’t have a problem!” Mary recalls.

Meanwhile, Mary continued to have no contact with . She was rediscovered by chance, 52 years after her ads were first published. Mary’s niece and a high school classmate were looking through old photos when they came across a familiar face. The two took a picture of one ad and contacted , letting a consumer hotline operator know what had been found.

When the request finally reached the company archives, the team assumed the claim was false.

“We get these kinds of requests all the time,” explains Jamal Booker, manager of heritage communications. “We have a whole file on people who claim to be models.”

Fortunately, Mary had kept a personal letter from the company from her modeling days. She faxed it in, and the team quickly called back to verify what Mary had known all along.

“In more than 30 years of people claiming to be models, Miss Mary was the only one who had proof,” Booker says. “We were shocked.”

Just months earlier, one of Mary’s ads had been selected to be featured at the World of . The company brought Mary and her husband to Atlanta to see the exhibit and learn more about the story that almost went untold.

At the World of in Atlanta with her husband of 30 years, Henry Alexander. "We were married three years before I realized I was married to a model,” Henry says.


“Miss Mary reflects the humble confidence of the brand itself,” Booker says. “She rarely, if ever, mentions the fact that she was an advertising trailblazer. If it had not been for a fan of hers, we wouldn’t have even known she was out there.”

A lesson learned, now keeps in close contact with Mary, now 78. Retired and living in Ocala, Fla., she periodically visits Atlanta for speaking opportunities and events.

Though she is flattered by the attention, she says it’s not about her.

“I hope I opened some doors. I hope I laid some groundwork for people in the future to see what can be done despite the odds,” Mary concludes. “That’s why I’m just so happy about it."