Share a Coke Helped Me Connect with a 'Bhai'

(Editor’s Note: Different relationships mean different things to people- ‘Boss’ could denote a spouse for someone or ‘BFF’ can be another’s father. In the spirit of the ‘Share A Coke’ campaign which celebrates relationships, Journey invited employees to share their take on a relationship that is special for them. Here is a compilation of some heart-warming stories that truly celebrate the people they would like to share a Coke with!)

On our recent trip to Kahna National Park last month, my friend and I boarded a train from Delhi to Jabalpur. From there, a road trip to the park would take us another four hours, depending upon how good the highway and traffic would be.

And thus our journey began. It was one of those ‘fast trains’ which stop for only a few minutes at even fewer stations. The on-board catering hadn’t started; hence, we were waiting for Jhansi Junction, which was about five hours away, for our quick dinner. We were just starting to enjoy our ride and our conversation. It was our annual ritual to visit a national park and be part of nature, to enjoy the reserve’s beauty and spot the beasts – Tigers. Since it was something that we both dearly loved, we never kept track of time.

When Jhansi junction arrived, we both stepped out to grab a snack, since, we only had 15 minutes. While my friend went looking for food, I got held up overhearing a conversation between a father and a son at the station.

Son: “Papa, IPL is due to begin, all my friends and I at school are very excited.”

Father: “Me too, son. I hope both your elder sisters and your mother have picked up some love for the game and they’ll watch it with us.”

Son: “Pari didi mentioned she likes Virat Kolhi but I’m not sure about Bijli di. And mummy needs to spend some time with us.”

Son: “And papa, my friends and I have also decided to play cricket every day during the IPL and form our own league. And I now want that bat and ball set that I have been requesting from you for over three months.”

By this time, I stood little closer to them and the father noticed this. We exchanged pleasant glances which broke into smiles.

While the son was completely oblivious to my presence, the father started to get a little embarrassed of it during their private talk.

Son: “You have been repeating this since last December. India won both the series with Sri Lanka and then the tri-series between Sri Lanka, Bangladesh and India. When will I win, papa?”

Son: “You keep saying that, papa. Last month you said the same. You work at the bank. Why don’t you take some money from them and buy this for me?”

The father looked at me. I smiled and gently waived my hand to him as a gesture for him to continue his conversation and not get bothered by my presence. He smiled back in acknowledgement.

Papa: “Vishal, you ride Bijli didi’s cycle the most.”

Son: “Please papa. Don’t change the topic. I’ve been asking you for only one thing for such a long time.”

Papa: “Of course, Vishal. We’ll get your bat and ball. The way we got your shoes early this year, your favourite school bag and the special digital watch you wanted last year.”

The father looked at me and smiled. He was now feeling a lot more relaxed by my presence and almost included me in the conversation.

Son: “Again you changed the topic, papa. The league is about to begin. And I shall not be allowed if I don’t have my own bat and ball. By the way, I’m a good and recognised player amongst my friends. And they all want me in their team.”

Son: “OK then, can you buy this for me when we reach Jabalpur? Tomorrow? Promise?”

Papa: “No. you go ahead. And be quick since our train is about to leave.”

And the father got up to go to the convenience counter. I walked up to him as well just to conclude our little encounter. And as I was about to tap on his shoulders, he turned to me. And he gave me a bottle of which read ‘Bhai’ on it. He smiled to me and said, “jab mera beta kar raha tha meri pitayee, toh aap mere saath the. Toh aaj se aap mere Bhai.”

And my friend returned with some snacks and said, “Phew! Finally got some quality samosas and sandwiches after much searching. Where were you?” 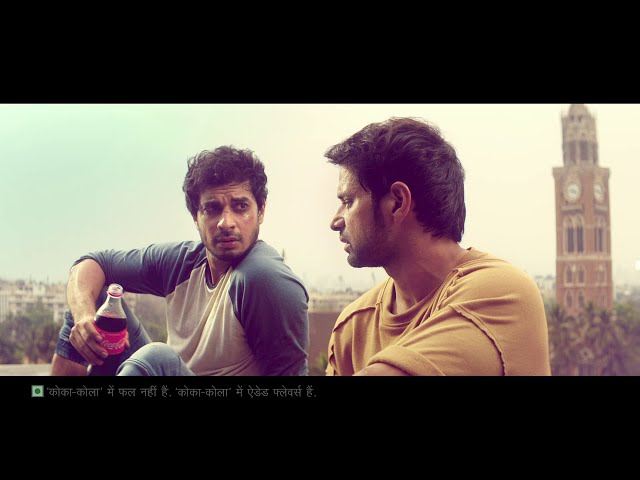 Related Items
Another Sip
The Fizz
RECOMMENDED FOR YOU
If Shakespeare’ Played Cricket!